Tommy Matthews, a literary student at a big-city university, manages to work up the courage to ask out his classmate Kelly Watson, who accepts. As the two go out to lunch, Captain Colossus, a superheroine with the power to grow to gigantic size, chases down and snatches up a truck containing some bank robbers. Tommy admires her, but Kelly seems a little irked to see him doing so. Three weeks later, Tommy and Kelly are in bed together, when Kelly tells Tommy she’s supposed to be meeting up with her mother Sharon, a food critic for the local newspaper, who has volunteered to buy her a new laptop. They meet up at a local shopping mall, and seem to get along well. As the trio look at laptops, Sharon gets a call from someone telling her about a fire at a chemical plant, after which she quickly hands her credit card over to Kelly, makes an excuse as to why she has to leave, and runs off. Tommy is shocked that Sharon would do such a thing, while Kelly simply seems disappointed. Sharon hides in an alleyway and begins to grow larger, bursting out of her clothes and turning into a red-haired giantess, who is revealed to be none other than Captain Colossus herself. She runs off through the city streets, continuing to grow and passing Tommy and Kelly as she does so. This time however, Tommy avoids looking too closely at her, which meets Kelly’s approval. At the chemical plant, two workers are desperately trying to hold on and avoid being overwhelmed by the fumes in a burning crane, but are rescued by Captain Colossus, who also takes the time to put out the fire.

Unlike the two previous stories by this author, this one is an original storyline, not directly based on any prior work, but based on the superheroine genre. The beginning of the story introduces us to Tommy and Kelly, the main characters – Tommy is essentially the audience’s viewpoint character, an average (if slightly geeky) guy who struggles to work up the courage to ask out Kelly, but finds success when he does so. Likewise, Kelly is a smart, perky everywoman, though as we’ll find out she harbors some rather strange secrets in her life. Shortly afterwards, we meet Captain Colossus, the local superheroine and giantess, who quickly deals with some bank robbers attempting to escape the scene of their crime. This gives us a little bit of handheld action, too. The story then jumps forward three weeks, in which time Tommy and Kelly’s relationship has grown closer. The issue of a broken laptop leads to a shopping spree, and introduces us to Kelly’s mother Sharon, who seems to be another normal woman, but deep down hides a major secret. She soon bails out on the shopping trip to switch to her alter-ego Captain Colossus. This leads to a growth sequence, and of course some nudity before the Captain activates her costume generator. We then end the chapter with a little gentle giantess action, as she saves two workers from a fire.

RELATED TO The Superheroine’s Daughter 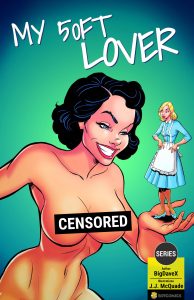 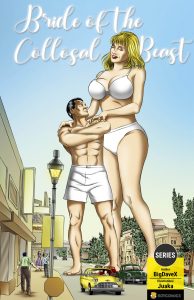 Bride of the Colossal Beast