With Jack turning twenty-one, his multi-millionaire Father (Sam) attempts to mend their broken relationship. Using the Master PC program, he attempts to bestow him the ultimate gift. First, Sam uses the Master PC program to try and entice him with a very attractive intern, but the plan fails when they learn that Jack’s heart belongs to another girl by the name of Jessica. Sam tries to use Master PC on Jessica, but fails because she’s located outside the program’s radius. Sam then tasks his best operative, Tara, to retrieve the girl, but Tara soon discovers that this isn’t just any Jessica, but Jessica Seavers; the three-time National Karate Champion. Tara readies herself for a volatile confrontation, as Jessica proves herself strong and focused, but the inevitable happens, resulting in a startling transformation. Jessica’s once strong athletic frame turns soft and voluptuous, and the passion she felt for karate and her college studies is replaced by her new desire for sex. Jack sits down to celebrate his birthday by letting his Father take him out to dinner, and Jack is about to receive the ultimate gift!

Master PC – The Ultimate Gift has a little bit of everything. Physical transformation, serious ass-kicking action, edge of your seat suspense… and a whole lot of nudity and sex. When JR Parz wrote Master PC back in the late 90s, little did he realize the impact it would make, as it turned Master PC into a universe where several authors contributed by writing their own Master PC tale, some of which were novel length epics. The advantages of writing in this universe is that the greater majority of the readers are already fully versed in Master PC, therefore it allowed JR Parz to cut to the chase. Sam Walters is ruthless and lacks morals, but he’s also lonely and wants to share his good fortune with his son. His son (Jack) is good, but he will be tested with the ultimate temptation. Jessica Seavers is a Champion and possesses an iron-clad will, but is it possible for someone to withstand such a transformation? Jessica’s younger sister (Jennifer) is exposed to a life that she quickly finds addictive… and although Tara is at the top of her game, wouldn’t she be making a mistake to think of herself as non expendable? Master PC – The Ultimate Gift compels you to turn the page, delivering one cliff hanger after another with each ten page arc. 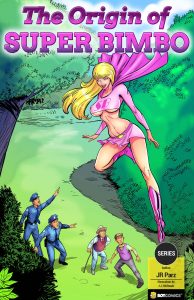 The Origin of Super Bimbo 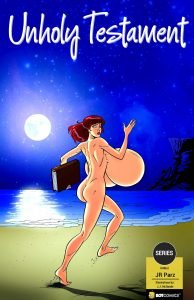 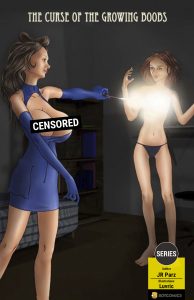 The Curse of the Growing Boobs 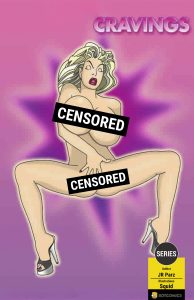