A symbiotic life form sleeps peacefully inside a comet – until its home collides with a ship orbiting Venus. The comet and ship are now awash with flame, having fused together in the impact. Calamity ensues as the two-man crew, taken by surprise, try to contact their Moon base and put out the fire. Woken by the crash, the comet’s alien passenger suddenly appears, luminescent and floating outside the ship. Distracted by its jellyfish-like form, one astronaut fails to quench the fire and soon becomes engulfed. Seeing him in peril, the alien phases into the ship, extinguishes the flames, and encases him in its membrane, fusing with his body. Completing his Moon Base distress call, the other Astronaut goes to investigate the damage. Instead, he finds Venus, a symbiotic being from the planet of her namesake, fused with the physical remnants and consciousness of his injured friend. A tall, curvaceous, and full-bodied alien humanoid stands before him. She is overjoyed to find a new human playmate. Though the other astronaut tries to resist her advances, not wanting to abuse the body of his friend, he soon succumbs to her passion. Little does he know that his friend is still conscious, feeling, and more than willing to participate. After indulging their carnal desires, Venus and her host return to Earth. They decide to live as one, and embark on a new mission: protecting the Solar System from evil while spreading sex and love between all races, genders, and planets!

Venus The Space Bimbo is out of this world! Dick Armstrong, an astronaut piloting the spaceship Vanera X, is glad that his time aboard the surveillance orbiter is coming to an end. He and his co-pilot Woody Cochran, hope they will soon be able to return home to the local Earthling space station. Their wishful thinking comes to an abrupt end when a comet, undetected by radar, collides with their ship and set a portion of the cargo bay ablaze. Woody hurriedly gets a distress call, while Dick rushes to extinguish the fire. He is diverted from this task when he spies a ghostly alien hovering outside of the ship and examining the damage. The alien senses his pain as he is engulfed in flames from the wreckage. Quickly, she re-materializes at his side and extinguishes the flames – then, sensing that there is no other choice, the alien bonds with what is left of Dick Armstrong’s body. Woody races to check on Dick, only to find Venus, a voluptuous, green-skinned, black eyed space bimbo. She explains that they are the first humans she has ever met, and that by healing Dick, she has bonded with him forever. Overcome by her otherworldly beauty, Woody succumbs to her charms – but unbeknownst to him, Dick is still conscious, and enjoys their passion more than either could have anticipated… 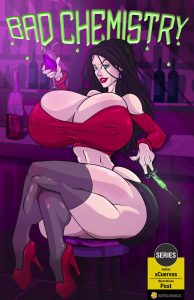